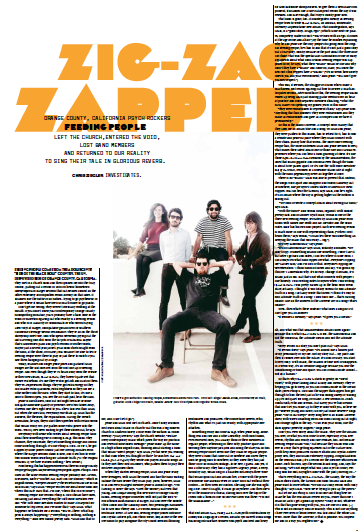 Here’s the opening third of Chris Ziegler‘s full-page feature on Feeding People in the new ish of Arthur, layout from the paper above with Ward Robinson‘s photo….

Feeding People come from the Adolescents’ “Kids of the Black Hole” country, the un-Disneyfied side of Orange County, California. They met in a church band and then spiraled off into the cosmos, putting out a record in 2010 on heroic hometown emporium Burger Records that out-freaked almost all the other extremely accomplished freaks already on that label. It sounded like the battle of all battles—trying to go psychedelic in a place where it would have been so much easier to go plastic.

Don’t get me wrong. They weren’t obviously frothing at the mouth. If you didn’t know your contemporary Orange County bandspotting minutiae, you’d probably have a hard time in the wilds of Fullerton figuring out who exactly is a Feeding Person and who is in Audacity or Cosmonauts or who works buying used vinyl at Burger, indisputable ground zero of Southern California’s teenage weirdo renaissance. They’re all on the thrift store/swap meet vibe, kids who spend weekends prying out the last surviving cool shit from the tar pits of suburbia. Maybe that’s Goodwilled punk and psych records or leather boots, maybe just a decent jean jacket. (Plus band shirts bought from the band, at the show, of course.) You wouldn’t be able to tell if Feeding People were there to play or just there to watch if you saw them hanging out by a stage.

Today, founder and singer Jessie Jones and guitarist Louis Filliger are the last ones left from the first line-up of Feeding People. And even though they’re 72 hours away from the release of their new album, Island Universe, they haven’t quite left that earlier era behind. It’s like they’ve still got ash and dust on them. They’ve … experienced things. They’ve got extra energy so they can muster extra quickness, extra brightness so they can see a little farther into the dark. When they start to talk, it’s like a door is thrown open—you’ll feel the air rush past, hear the slam.

Jessie is dark-haired, slim but not slight because of some not-quite-nameable quality of presence. Even two tables away, it seems like she’s right next to you. She talks less than Louis, but when she does, everybody else shuts up. Louis has the answers, the theories, the explanations. During the French Revolution, he says, they’d start their speeches with certain words that would really HIT. (He pushes some extra power into the word—THUD.) He’s been waiting to get these stories out, he says.

Everybody with sense who writes about Feeding People talks about how something else is coming THROUGH this band. They channel, they incarnate, they let something strange and cosmic come scorching through. It’s like Philip K. Dick—in 1974, he got zapped by some power cosmic just five driving minutes from where the Burger Records stand is now, and it led him to write two million words searching for ultimate truth. (“A: The enigma remains. Q: We have learned nothing,” Dick decided.)

Point being, this has happened before out here in Orange County. People get zapped. Maybe Feeding People got zapped. Philip K. Dick liked all the same records Feeding People probably dig—Germs, Screamers, Bach’s “Wachet Auf, Ruft Uns Die Stimme,” which in English means, “Sleepers awake!” (“The secrets of music are in classical music,” says Louis. “People will tell me about some band like, ‘Check this out!’ Fuck that—I’m like ‘Check this NOCTURNE!’”)

And Feeding People liked records Philip K. Dick should have dug, including just about everything the 13th Floor Elevators ever did: “The 13th Floor Elevators wanted to make a blueprint for someone to trip off of, and I’ve done that,” says Louis. What happens? He hesitates for a second. “You’re … there. What happens is always happening.” (“‘Everything is nothing, nothing is everything,’” adds new bassist Jeremy Katz. “Louis said that to me, and I can’t let it go.”)

Anyway, Feeding People first met in church—didn’t Roky Erickson first learn about music in church? But this was a big modern church in Anaheim barely a mile from the Richard M. Nixon freeway: “[Our] services,” says the church website, “feature lively contemporary music which paves the way for practical and relevant Bible based message.” Jessie made up the name in a high school English class, thinking about starting a band that would “affect people,” says Louis. (“What were you reading in that class when you thought of that?” he asks her. “Fear and Loathing In Las Vegas?”) They wrote and played acoustic songs til they met their first drummer, who’d push them to their first-ever amplified show.

When they’d started Feeding People, they really were teenagers, with Louis the oldest and half the band waiting outside the bars before they could play. (Now, however, Louis is 26 and even youngest member Jessie is almost of age—“I’m turning 21 now!” she says. “Alert the world!”) But even that young—and unique among this new wave of Orange County bands—Feeding People connected with not just the rock ‘n’ roll scholars-slash-maniacs at Burger, but also Free The Robots’ Chris Alfaro and the Gaslamp Killer, two personages fundamental to Low End Theory and L.A’s world-famous instrumental beatmusic scene. At Low End, Feeding People would join Entrance and Crystal Antlers (oh, and Thom Yorke, too) as one of the few live bands to play alongside the city’s most forward-thinking beatmakers and producers. The connection? Reverb, echo, rhythm and what I’ll just call reality, with appropriate awe attached.

And something did come through when Jessie sang—something real and raw and a little unearthly. With other bands, even excellent ones, you could still think of them as regular people, rehearsing in their ratty practice space and working their daytime jack-jobs and doing the stuff you do too. With Feeding People, they suddenly weren’t regular people. They were a band that came out of nowhere, and that knew they’d soon be going back to nowhere, and that knew they had just that 20 or 30 minutes on stage … to be free, I guess. And yes, it was a little scary. They had a fugitive’s urgency. Jessie, a receptionist by day, would sing in a haunted not-always-there voice that would spiral out and around her, a voice with the power of someone like Mariska Veres or Grace Slick but without their control … or their need for control. She sang like she was lighting a fire. Once it caught, it could go anywhere. And then she’d be in the middle of a chorus, staring back over the top of the crowd into a horizon line no one else cared was there: “I’m not the saaaaaaaame …”

Read the final two-thirds of this feature in Arthur No. 34, on sale now for FIVE DOLLARS — buy it from a hip store near you, or order direct from us.