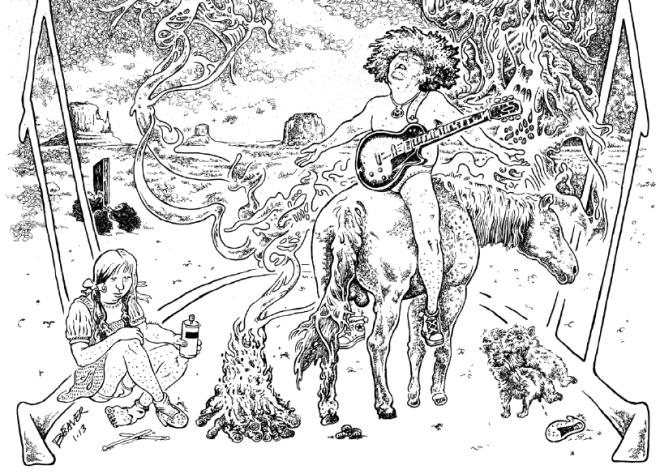 Here’s an excerpt from Stewart Voegtlin‘s epic thinkpiece on Melvins’ Lysol era in the new ish of Arthur. Above is a detail of the giant illustration for the piece by Beaver…

…Easiest, quickest way to learn what “big” and “heavy” consist of is to “do it.” Melvins did it. They made big, heavy records, long before Lysol. Future Melvins bass player Mark Deutrom produced their two biggest, heaviest, earliest records: Gluey Porch Treatments (1987) and Ozma (1989). Deutrom’s production, so simplistic it sounds complex, is unobtrusively brilliant, as its hands-free take leaves room ambience and artistic attack alone to their violent courtship. Results are uncommonly common: with 24 tracks for three instruments and vocals, everything sounds as it should—like itself. While “Grunge” reappropriated the more banal aspects of Zeppelin and Sabbath, Melvins strove intentionally (or not) to resist imitation, instead building a band and music unlike everything that revolved around them in Seattle’s “Emerald City.”

How is it that Osborne, Preston, and Crover held Lysol up as prayer, as homage, as event? How is it three musicians escaped predestined life plan as mere accumulation of echoes? How is it they became collective sage paid tribute to by lesser folk in the long march towards mass artistic reproduction? Deutrom certainly helped. Without much embellishment, he “allowed” Melvins to show themselves what they already knew. But when the haze of convenience store zen burned off, Melvins only knew they didn’t.

Whereas other bands consciously manufactured “heaviness,” Melvins’ music was symptomatic of its criteria, even as it masterfully submitted it to erasure within any given song’s parameters. The banal, blues-based music, thickened by overdriven guitars and castle walls of amps, was modified with prankish disregard for its form. Early “single” “Oven,” from Gluey Porch Treatments, is 1:29 of breakdowns, its beginning same as its midsection, its conclusion. Crover’s recycled beat is marching band jive, trucker speed jittered, locking jaws after every breath. Osborne’s chords ring out and then vanish completely, relegated to the stupid static squiggle that sounds when one plugs in. When it all comes together, Osborne paints randomness over Crover’s wind-knocking accents: “Pez are gonna let it slide gonna burn what cotton decides are apelee / My main oven drive he took from under what’s come over me.” “Just like witches at black masses” it ain’t.

When Melvins wasn’t shaving flesh from the form, it was adding it—in sheer tonnage. “Charmicarmicat,” from the Eggnog EP (1991), is 12:51 of climax denial. Its Seussian title fulfills its promise: this is anapestic tetrameter as water torture. Osborne’s lexicon is again emptied into the song’s baggy form with nary a trace of intention. Words “soul” and “steam” flirt with Greek notion of “psuche” as “breath” and dissolve through incoherent commands: “Wash away / Wish away.” It’s tempting to draw a big red circle around “soul” and “psuche” and “breath” and the first four seconds of “Hung Bunny,” which ostensibly feature Osborn’s breath being “washed away” by an avalanche of overdubbed guitar. Like the third line of “Charmicarmicat,” “Hung Bunny” is the “more [Osbourne has] craved for,” the “endless stream”—transliteration of the Hessean river of eternal totality.

“Oven” and “Charmicarmicat” are the token of “what it is to be heavy” in Melvins’ world. These songs do not “try to be x;” they “are x.” The music is presented, like a cold or disease, rather than adhering to the nuts and bolts of the genre it is purportedly part of. It is a state altered by abnormality rather than a state assumed, or mimicked by norms. Yet it follows naturally instead of artificially. “Big” and “heavy” were just tools in a box. Melvins were never a “handy” band. They worked with readymades, not materials. Music wasn’t “made;” it just “was.” There was no “ad hoc.” No “template.”

Only recorded analogue predating Melvins’ sound is the one minute, 58-second Van Halen instrumental, “Sunday Afternoon in the Park,” from Fair Warning (1981). It’s a classic Edward Van Halen bit, frankensteined together out of an overdriven child’s synthesizer, and his brother, Alex, imitating John Bonham’s heart rate post four bottles of vodka on a drum kit that must’ve been recorded in a cavernous high school gymnasium. The result’s a tune as off-putting as it is hermetic—Melvins’ essence—shrink-wrapped and sent out into a world oblivious to its power.

Whether Osborne or Crover heard “Sunday Afternoon in the Park” or not is anyone’s guess. Sure, it sounds like Crover on the kit. It sounds like something goofy and unsettling they’d easily pull off. But that would mean Melvins’ aesthetic was premeditated, when their music’s truly the core’s stylistic perfection married tempestuously. A more likely scenario is Osborne and Crover let their band be merely out of ashcan nihilism bandied by norm-terrorists Pussy Galore and Flipper. Les Paul, strings slung from its neck like loose laundry lines; floor tom became mounted tom; snare not a snap but a slag at six feet deep; metal pulled from scrapyards set high for the striking. Bass a 50-foot sledge swung with the parting of every breath. Melvins had worked through two other bass players—Matt Lukin (credited as one of Melvins’ founding members), and Shirley Temple’s daughter, Lori “Lorax” Black—before indoctrinating the mysterious Joe Preston into the fold. And that’s when Oz got its Wizard…

Find out what happened next — read the rest of this piece in Arthur No. 34, on sale now for FIVE DOLLARS. Buy it from a hip store near you, or order direct from us.