It’s fig season in California. Those sweet tree warts are beginning to sag with the weight of their sugars. True bliss for urban and rural foragers alike. The season reminds me of these folks…

Seven of California’s “Nature Boys” in Topanga Canyon, August 1948. They were the first generation of Americans to adopt the “naturemensch” philosophy and image, living in the mountains and sleeping in caves and trees, sometimes as many as fifteen of them at a time. All had visited and some were employed at “The Etropheon” where John Richter gave his inspiring lectures about raw foods and natural living.

This magnificently illustrated book chronicles the philosophy, lifestyle and dissemination of Lebensreform, (Life Reform – “neither communism nor capitalism, but land reform”). In reaction to industrialization, from Hermann Hesse and the artist Fidus wanderings through pre-WW1 Germany in edenic bliss to Bill Pester going natural in a Palm Springs canyon. Pester, a German born immigrant, was counted in the 1920 census as one of the 24 members of the Cahuilla tribe.

Bill Pester at his palm log cabin in Palm Canyon, 1917; note palm blossoom walking sticks leaning on left side of the door.

Man was intended to live in a state of nature. All mans troubles, sickness, anxieties and discontent come from a departure from nature. I would advise you to go back to nature, if you want to be cured; give up your extravagant habits, your high-priced hotel life, quit taking medicine and discharge your doctor. -Bill Pester 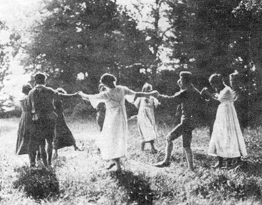 7 thoughts on “Children of the Sun: German and California Proto Hippies”