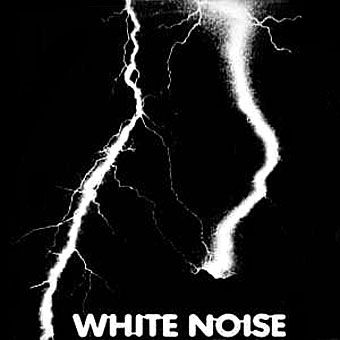 Many sounds have never been heard—by humans: some sound waves you don’t hear—but they reach you. ‘Storm-stereo’ techniques combine singers, instrumentalists and complex electronic sound. The emotional intensity is at a maximum. Sleeve note for An Electric Storm, Island Records, 1969.

An Electric Storm by White Noise is reissued in a remastered edition this week. It’s a work of musical genius and I’m going to tell you why.

Hanging around with metalheads and bikers in the late Seventies meant mostly sitting in smoke-filled bedrooms listening to music while getting stoned. Among the Zeppelin and Sabbath albums in friends’ vinyl collections you’d often find a small selection of records intended to be played when drug-saturation had reached critical mass. These were usually something by Pink Floyd or Virgin-era Tangerine Dream but there were occasionally diamonds hiding in the rough. I first heard The Faust Tapes under these circumstances, introduced facetiously as “the weirdest record ever made” and still a good contender for that description thirty-four years after it was created. One evening someone put on the White Noise album.

It should be noted that I was no stranger to electronic music at this time, I’d been a Kraftwerk fan since I heard the first strains of Autobahn in 1974 and regarded the work of Wendy Carlos, Tangerine Dream, Brian Eno and Isao Tomita as perfectly natural and encouraging musical developments. But An Electric Storm was altogether different. It was strange, very strange; it was weird and creepy and sexy and funny and utterly frightening; in places it could be many of these things all at once. Electronic music in the Seventies was for the most part made by long-hairs with banks of equipment, photographed on their album sleeves preening among stacks of keyboards, Moog modules and Roland systems. You pretty much knew what they were doing and, if you listened to enough records, you eventually began to spot which instruments they were using. There were no pictures on the White Noise sleeve apart from the aggressive lightning flashes on the front. There was no information about the creators beyond their names and that curious line about “the emotional intensity is at a maximum”. And the sounds these people were making was like nothing on earth.

After the Jean-Jacques Perrey-inspired hilarity of Here Come The Fleas and some druggy (and weird) psychedelia, we were into side two and The Visitation, a lengthy song/audio drama concerning a dead biker who returns to see his weeping girlfriend for the last time. The middle section is an electronic road journey that predates Kraftwerk’s similar sequence in Autobahn by five years. The simple musical theme was sublimely creepy, the sound effects literally out of this world. To my drug-addled brain this mysterious group had actually managed to create in sound the experience of being dead. This was exhilarating and deeply unnerving. Artist Mati Klarwein once related how it felt hearing Bitches Brew for the first time after Miles Davis had made him snort a line of coke beforehand: “When I heard the tapes I couldn’t believe the music. At first I thought it was the cocaine. Then I realised it was just incredible.” I know how he felt; the emotional intensity was at a maximum.

The final track was the icing on the cake. Of all the musical attempts to depict some kind of Satanic netherworld this is easily the most chilling and convincing. I don’t care what gaggle of blood-drinking, face-painted diabolists you want to bring to the virgin sacrifice, Ozzy and co. included; all must prostrate themselves before a polite bunch of English technicians. Electric Storm In Hell sounds exactly like its title and achieves its ferocity without guitars although the group did rely on a thundering phased drum kit to hold together those sounds of screaming souls being struck by lightning in a godless void.

After this first exposure I quickly acquired a copy of the album myself and played it to death, eventually gaining a reputation for foisting the horrors of side two on people when they were tripping. (To be honest I only did that once…) 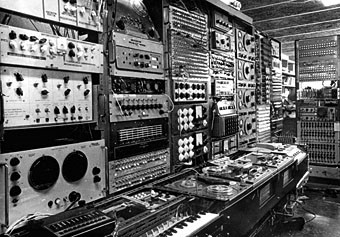 Electronic music the hard way: the Unit Delta Plus studio, 1966.

So why was it so good, why does it still sound like nothing else in the history of music? Two words: Radiophonic Workshop. White Noise was a chance grouping of music and electronics student David Vorhaus together with Delia Derbyshire and Brian Hodgson of the BBC’s Radiophonic Workshop who’d been indulging in some extra-curricula activity under the name Unit Delta Plus, a short-lived experimental music project. The Radiophonic Workshop was a special department of musicians and engineers who provided jingles, theme tunes and sound effects for BBC radio and television. Delia’s most famous production was (and still is) her arrangement of Ron Grainer’s Doctor Who theme which she created using tape collage and very primitive oscillator equipment. Despite being reworked many times that original version still sounds unearthly. Not only was this the world’s first electronic TV theme but in 1963 it would have been the first electronic music most people heard at all.

The Radiophonic composers were tasked with creating music and sound effects the hard way, pre-syntheziser, using tape edits, varispeed and whatever rudimentary electronic devices they could lay their hands on. This was all they did, each day and every day, with the BBC footing the bill. So when a producer called asking for something unusual they had a formidable range of techniques that could be applied. Brian Hodgson’s TARDIS sound effects for Doctor Who are still in use today, and all that time spent producing theme tunes meant that Derbyshire and Hodgson were used to applying tape effects and audio collage in the context of popular music, rather than the more usual contemporary classical setting of electro-acoustic composition. David Vorhaus gave the pair the impetus to re-brand themselves and try something new, which is how An Electric Storm came about, with a proposal to Island Records for a vaguely psychedelic single, Love Without Sound. Chris Blackwell was enthused by the idea, gave them some money and told them to come back with an album.

Producing a novelty single was often as far as most electronic musicians got at this time especially given the huge amount of effort required to produce enough music to fill forty minutes. What’s extraordinary about the Electric Storm album is that all of it works, all the songs are great, strange songs. The only thing comparable is the equally wonderful album by Joseph Byrd‘s United States of America released the year before which featured similarly great songs with outré arrangements, mostly the product of ring modulators and other crude equipment. Yet that album sounds dated now, albeit in a good way. Many of the songs, despite their lyrical perversity, aren’t so far removed from Jefferson Airplane and the album as a whole owes much to the structural ambition of Sgt Pepper. A few of the White Noise songs sound of their time—Love Without Sound, Firebird (which would have been the single B-side) and Your Hidden Dreams especially so—but the otherworldliness of the arrangements lift them completely out of their era. So many of the tape sounds are completely unprecedented that it didn’t matter that synthesizers were coming along to replace all that laborious cutting and pasting and re-recording. Minimoogs were surprising and new in the early Seventies but now sound like…..Minimoogs; they’re as dated as wah-wah pedals. An Electric Storm still sounds like nothing else ever made. I place much of the originality and the sonic darkness at Delia’s door, she had a genius for the sinister that was evident as far back as the sucking reverse envelope that runs through the Doctor Who theme and the fluttering, purring noise that comes in at its very end. This unique quality has become more evident with the posthumous reissues of her library music and other TV and radio themes and it’s sad that she didn’t live to see the real influence and appreciation of her work that’s blossomed in recent years. In a field usually dominated by male nerds she was brilliant and dedicated and fiercely original. 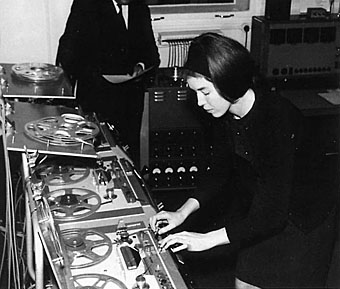 David Vorhaus continued with White Noise after An Electric Storm but his second album lacks the magic and quality of the first; it lacks, I’d suggest, the Delian Mode, to borrow a title from one of Derbyshire’s solo compositions. More crucially it also lacks the song elements that make An Electric Storm such a success. Those original recordings had a curious afterlife, however, turning up in remixed form when Derbyshire and Hodgson worked on another children’s TV series, The Tomorrow People, with Dudley Simpson, and parts of Electric Storm in Hell are played during the invocation scene in Dracula AD 1972, the music there being far more chilling than anything in the rest of the film. Derbyshire and Hodgson also provided a suitable spooky and minimal score to The Legend of Hell House in 1973, a clone of The Haunting which makes me wish that Delia had produced the score for Robert Wise’s original film in place of Humphrey Searle’s orchestral bombast.

Two decades later groups such as Pram and The Orb were sampling from An Electric Storm (listen to Outland on The Orb’s Adventures Beyond the Ultraworld for a repetitive trill swiped from Love Without Sound) while Peter Kember of Spacemen 3 did much to bring Delia back to the attention of the music world before her untimely death in 2001. The work of the Radiophonic people has had a lasting influence on a new generation of British musicians, cited by Aphex Twin, Add N to (X), Broadcast, Pet Shop Boys (who had a track, Radiophonic, on their Nightlife album), Saint Etienne and many others. Most recent of these inspirations come from the Ghost Box collective who combine the jauntiness of Seventies’ library music and TV themes with a particular strain of English spookiness to brilliant effect.

This new CD reissue will be a welcome replacement for the poorly-produced edition from 1992 with its error-ridden insert notes. For more about the history of the Radiophonic Workshop, including an interview with Brian Hodgson and footage of Delia Derbyshire at work, the great BBC documentary, Alchemists of Sound, is on YouTube.