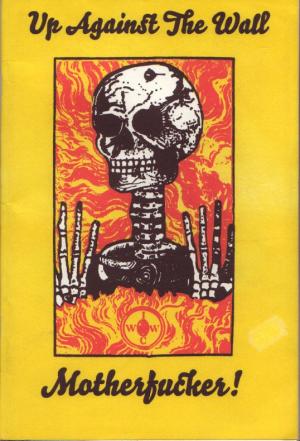 Anarchist Forum: “The Up Against the Wall Motherfuckers”

A look back at the fascinating Lower East Side anarchist group first known in ’66 as a Dada art movement called the Black Mask, but then in ’68 became more active by feeding the poor, setting up crash pads, occupying a Columbia University building, promoting surrealist protests, shutting down MOMA, providing free weekly musical events and irritating the police. They became known widely as the Up Against the Wall Motherfuckers.

Speakers at the forum will be the Living Theatre’s Judith Malina, whose conversations with the painter Ben Morea, one of the group’s founders, led him deeper into anarchism, and Osha Neumann, who was an early member and has this year published a book on the history and soul of the group.

The event will take place at The Living Theatre, 21 Clinton Street, Manhattan (just south of Houston St) (212-792-8050). Coming from uptown, take the F or V train to “2nd Avenue” (exit front of train on 1st Ave, walk east along Houston and turn right on Clinton) or coming from downtown, take the F, V, M or Z train to “Delancey – Essex” and walk east on Delancey three blocks and turn left on Clinton for 2 and a half blocks.

Everybody is welcome and invited to come and to have their say. There is no set fee for the presentation, but a contribution to aid the LBC is suggested.

If you have questions, contact the Libertarian Book Club/Anarchist Forum, 212-475-7180 or e-mail: roberterler (at) erols.com