All info here excerpted from The 2013 Autonomedia Calendar of Jubilee Saints: Radical Heroes for the New Millennium by James Koehnline and the Autonomedia Collective 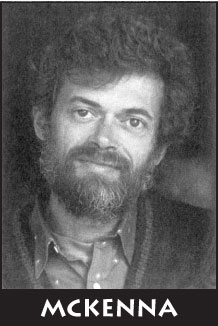 Originally published in Arthur No. 22/May 2006 (available from the Arthur Store)

The anthropologist and author Jeremy Narby hit the intellectual freak scene in 1998 when he published The Cosmic Serpent, an audacious, intriguing, and entertaining dose of righteous mind candy that grew out of his decades-long explorations—both personal and scholarly—of the ayahuasca-swilling tribes of the upper Amazon. A Canadian living in Switzerland—at least when he’s not researching in the jungle or working on indigenous rights—Narby is no bug-eyed hippie prophet of “the tea.” He is a grounded, sensible fellow with a dry wit, an unromantic but respectful view of shamanism, and an allergy to vaporous supernatural claims. (In Europe he also sometimes performs with the guys behind the Young Gods, a seminal Swiss industrial band that led the Wax Trax pack back in the day.) While Narby’s head has definitely been broken open, his book does not spend a lot of time on the “spiritual” import of the jungle brew. Instead, Narby focuses on one of the biggest claims made by the Amazonian shamans: that their ritual ingestion of the hallucinogenic brew not only brought them contact with the spirits of animals and healing forces, but actually gave them knowledge—actual data—about the workings of the jungle around them.

After all, some sort of weird data transfer is going on in the jungle (though its hard to say it reaches the increasing numbers of spiritual tourists who are now hustling down to the Amazon and transforming shamanic culture with first world dollars). The existence of ayahuasca itself may be one of the greatest mysteries. Ayahuasca is not one plant, but a relatively complex brew that requires a fair amount of preparation. How did the old ones know that, out of the 80,000 some species of plants in the jungle, only this vine, combined with that shrub, and then boiled down into black gook, can produce the mother of all trips (not to mention some grade-A karmic Drain-O)?

Narby takes the mystery one step further: could the shamans be right? Could the brew, which one informant calls “the television of the jungle,” facilitate the knowledge of the jungle? To approach this question, Narby attempts to “defocalize” his gaze so that he can perceive science and indigenous understandings at more or less the same time. This trippy conceptual exercise leads him to the central mindfuck of the book: that the serpents that commonly slip into the visual field during ayahuasca trips are a figurative expression of the ultimate source of ayahuasca’s visionary communiqués: the coils of DNA. Ayahuasca is not just a head trip – it is a communication with the “global network of DNA-based life.” Narby is no true believer, and he is somewhat startled by his own hypothesis, but that makes it all the more compelling, and the lengthy notes in the back of the book prove he is doing more than riffing.

After co-editing a powerful collection of first-hand reports of Western encounters with shamans, Narby came out with the book Intelligence in Nature. Rejecting the idea that plants and “lower” animals are mute mechanisms, Narby uncovers scientific evidence that impressive feats of cognition are going on outside the precious smartypants club of the higher primates. Narby looks at bees capable of abstract thought, and unicellular slime molds who are able to solve mazes. Perhaps inevitably, the book is not as wild a ride as The Cosmic Serpent, and Narby spends too much time describing his mundane journeys to research labs and too little time wrestling with how “intelligence” relates to choice, or awareness, or intention. Nonetheless, the book is a worthwhile example of Narby’s “defocalized” gaze – an undeniably scientific appreciation whose inspiration lies with the fundamental shamanic belief that other creatures, and even some plants, are, in their own world, “people” like us.

INTERVIEW
conducted by Jay Babcock over the telephone in late January, 2006

Arthur: You attended the conference on LSD held in Basel this past January to coincide with the 100th birthday of the father of LSD, Dr. Albert Hoffman. What happened there?

Jeremy Narby: What didn’t happen? I think one needs metaphors to get at it, really. When LSD hit in the ‘60s, it was like a drop of mercury that went in all kinds of directions, broke into a lot of different shards. Because LSD affects consciousness and consciousness affects everything, LSD had an impact in art, in music, in thinking, in the personal computer industry, in biology, and so on. In Basel all the different little pieces came back together and arranged themselves in a kind of mosaic that was psychedelic, multi-faceted and beautiful. All the chickens came home to roost after 40 years, looking good. One of my favorite moments was when Christian Ratsch came on the big stage with Guru Guru, which is the original Krautrock band. He was walking around with amber incense and stuff, providing incantations and shamanistic energy during the set, and these sprightly gentlemen, who must be about 55, just rocked the house down. It was fantastic.

Arthur: So, where does it go from here?

Jeremy Narby: One of the aims of the symposium was a kind of explicit political aim at getting psychedelic research back on the scientific map, and I think the point’s well taken. But you know, I’ve been working as an activist to get recognition for the knowledge systems of indigenous peoples and essentially despite a couple of decades of work and a lot of clear data (it seems to me), there’s really a fundamental resistance coming out of rationalism, coming out of Western cultures, coming out of the political systems. So I have the feeling of having led the horse to water but it didn’t want to drink. Sure, we can talk to the horse nicely and try and get it to drink the water some more, but finally I feel like more drastic tactics are needed. Like kicking the horse in the butt, or telling it to go and take a hike, or turning your back on it.

So I applaud these efforts to legalize psychedelic research, but… There are those among us who have wanted to use hallucinogens how indigenous people use them—in a serious way to understand the world. And we’ve been doing it, underground, for the last bunch of decades, and getting results that are richer and more interesting than what the Western rationalists are producing. So, I’d say that I’d rather take hallucinogens and then write stunning books than make speeches about hallucinogens.

Arthur: What was the response of Western rationalists to your hypothesis in The Comsic Serpent—that Amazonian shamans were actually receiving information at the molecular level via the ayahusaca trance?

Jeremy Narby: Scientists said that I hadn’t tested my hypothesis. Well, okay : I was just happy to have it considered testable! [chuckles] So how do we test it? Well, you try to falsify your hypothesis. You come up with a test to try to demonstrate that it’s wrong. That’s the scientific method. So, I thought, let’s send three Western molecular biologists with questions in their labwork down to the Amazon and put them into ayahuasca-induced trances. If they didn’t come up with any information then my hypothesis would start to look falsified. Now, it is a heavy thing to ask people who have never taken mindbending hallucinogens before to submit themselves to the experience in the name of science. These people are making their psyches available to you and then you distort them with these powerful hallucinogenic plants. In terms of ethics, this is even worse than experimenting on animals. It’s experimenting on humans. They were consulting subjects and all, but sheesh, this is serious business. I mean, the first thing that ayahuasca does, before it answers whatever questions you might put to it, is it tells you about yourself. It puts its finger on your weak spots, fast. It encourages you to clean up your act. This makes it a hard path to knowledge for somebody who’s into ‘being objective’ in the lab. As a scientist, you’re not supposed to pay attention to your subjectivity—you’re supposed to jettison it. But when you end up in an ayahuasca experience, it’s your little subjective self that is the hot point. Your subjective self comes to the forefront in your acquisition of knowledge. For a scientist, that’s a rough one.

Arthur: You were able to find volunteers, nonetheless. I gather they were colleagues… ?

END_OF_DOCUMENT_TOKEN_TO_BE_REPLACED

Excerpted from The 2009 Autonomedia Calendar of Jubilee Saints: Radical Heroes for the New Millennium by James Koehnline and the Autonomedia Collective.

Above: excerpt from Terence McKenna -The Alchemical Dream: Rebirth of the Great Work, released November 2008 on DVD. Available from Amazon

Description: “In the mid-1990’s Terence McKenna and Mystic Fire’s Sheldon Rochlin teamed up to make this rich and exciting film. Little did they know that this would be their last film. Originally titled Coincidencia Oppositorum: The Unity of Opposites and filmed in Prague with Terence portraying his usual erudite rendition of the Irish Bard, this filmed classic takes us on a journey into the alchemical renaissance of King Frederick V and his wife Queen Elizabeth of Bohemia. Playing the role of John Dee, court magician for Queen Elizabeth of England, Terence McKenna shows us how the promise of a return to the tradition of alchemy was almost instituted in Europe. He also shows us that this early attempt at the creation of an alchemical kingdom actually lead to the European Renaissance and the institution of Cartesian science and the beginnings of rationalism within the western mindset. This incredible film is not only beautifully filmed but is Terence McKenna’s finest performance and a worthy eulogy to his genius.”

Here is a much longer excerpt:

Ethnopharmacologist Dennis McKenna, brother of the late great Terence, will be doing a rare live interview/conversation today on Erik Davis’s new weekly commercial-free online radio program, EXPANDING MIND—the perfect name with the perfect host and perfect guest, really, as the McKennas’ work in the ’80s and ’90s really expanded the cultural dialogue about what altered consciousness was telling us, (or, for Terence, what the Plants are telling us), what the historical record and scientific studies could tell us about entheogen (or: psychoactive substance) use, and so on…and on…and on… Should be interesting to hear what Dennis is up to, and his current thoughts on all things entheogenic. The show is on at 2pmEDT/11amPDT TODAY (Thursday, August 6) at Progressive Radio Network, and then will be archived. Here’s the link:
http://www.progressiveradionetwork.com

In other Erik Davis news, he sez: “I will be giving a presentation on Aleister Crowley and the movies at the Northwest Film Forum, 1515 12th Ave in Capital Hill. That particular rite will go down on Thursday, Aug 13, at 9pm.”

Here’s the description for the night:

“Though he died in obscurity in 1947, the renegade magician Aleister Crowley has come to exert an enormous influence on popular and sub-culture alike. Join Erik Davis, author of Techgnosis and the 33 1/3 volume on Led Zeppelin IV, for a clip-heavy “performance lecture” on occult film.

“Sampling rare footage, experimental shorts and documentary clips, Davis will use cinema to trace the development of postwar magick and Crowley’s apocalyptic religion of Thelema, with special attention given to the work of Kenneth Anger and the rise of magic in the 1960s and 70s. Numerous obscurities will be sampled, including Curtis Harrington’s Wormwood Star, Rex Ingram’s The Magician and the Jimmy Page version of Anger’s Lucifer Rising. Also included are excerpts from Crowley: The Other Loch Ness Monster, Joe Schimmel’s Christian expose Rock ‘n’ Roll Sorcerers and cut-up wizard Craig Baldwin’s recent Mock Up On Mu.”

All info courtesy The 2009 Autonomedia Calendar of Jubilee Saints: Radical Heroes for the New Millennium by James Koehnline and the Autonomedia Collective