Some of the items still available at the store… 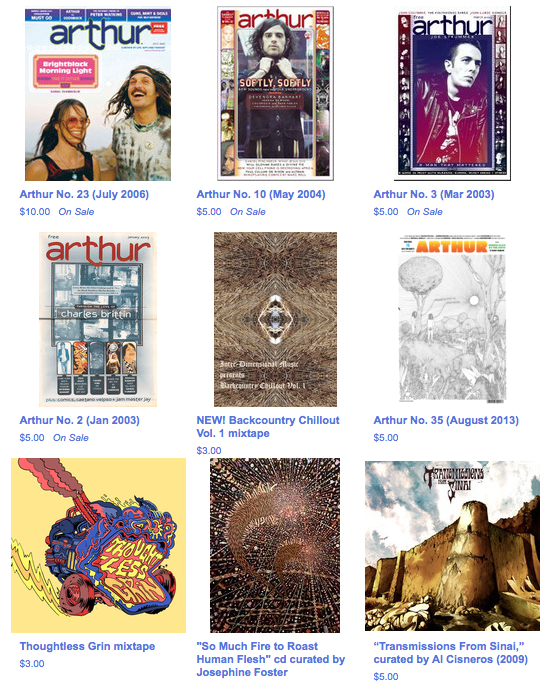 Wailing tough-funk first cut off Between My Head and the Sky, the new Yoko Ono Plastic Ono Band studio album out September 22, 2009 through Chimera Music of New York City.

Yoko headlined the second night of ArthurFest in 2005, and was interviewed at length by Arthur “Bull Tongue” columnists Byron Coley & Thurston Moore (and photographed by Eden Batki) in Arthur No. 26 (Sep 2007). (Read the whole article here.)

Brightblack Morning Light were interviewed by Trinie Dalton in Arthur No. 31 (Oct 2008), with photographs by Lisa Law. The magazine is available for $10 from the Arthur store. The article is available online here.

Brightblack were also interviewed by Daniel Chamberlin in Arthur No. 23 (July 2006), with photography by Eden Batki. Were almost out of copies of that issue, so it’s going for $100 from the Arthur store.

If Plato had had the necessary resources back in the day, he would have definitely buffed out his philosopher’s cave with black lights and fog machines. The old Greek dude never got the chance, but in the new millennium, Growing have done it for him, figuratively speaking.

Growing is Joe DeNardo, 26, and Kevin Doria, 27, two gentlemen who met at Evergreen University in Olympia, Washington. DeNardo is originally from the suburbs of Chicago, while Doria grew up in Richard Nixon’s hometown of Yorba Linda, tucked deep inside Southern California’s Orange County. Together they play a slug-paced, ocean-deep drone music without drums or traditionally recognizable melodies that nonetheless projects a palpable pulse and a sense of pro-biotic harmony. Over three albums, and assorted tapes and EPs, Growing have united the foreboding heaviness of doom metal with the reassuring beauty of placid ambience in songs stretching up to 20 minutes in length. The unlikely arranged marriage actually works. Call it life metal, or nature drone.

“We chose the name Growing because it seemed all-encompassing,” Joe DeNardo says, on the cel phone from the duo’s live-in bunker in Greenpoint, Brooklyn. “A lot of people didn’t like it at first because they thought it was a reference to marijuana or boners. Not so. It does seem to describe the process of living and dying without being heavy and ominous. Which is nice.”

For their newest album, The Color Wheel, Doria and DeNardo have expanded the Growing sound to encompass even more: now, discord and rhythm join the Edenic shimmerblasts and underlying thrum of their past work. If Growing is an entity, The Color Wheel is the sound of it in adolescence: the bucolic innocence of childhood mostly lost, replaced by awkwardness, dark intimations of mortality and, of course, new joys. Adolescence is beyond volition—it just happens, whether or not you want it to—and Growing’s growth seems to have happened in the same way: the band’s sound has unfolded in ways its makers didn’t contrive or foresee, yet nonetheless accept.

Speaking with DeNardo and Doria is not unlike listening to Growing: it ain’t gonna work if you’re in a hurry, and the less you pry for insight, the more revelations are likely to come. Then again, these guys are don’t confine the big slowdown to their guitarwork. They do everything slowly, including going though college (Doria: “Took me seven years and I’m not even a doctor!”).

“We’re not very conscious guys,” says DeNardo. “Like, we’re not very aware of ourselves. We just kind of…float. We don’t articulate ourselves all that well. We don’t talk to each other much about this stuff; we don’t line everything up like ‘Okay this is the idea: I’m thinking about the French Alps right now, I spent time in the caves, we can make some music like…’

“We don’t do that. It’s just all kind of melts and flows together.”

Growing was birthed in Olympia, Washington. For two years—or maybe three years, no one’s really sure—DeNardo and Doria lived in a house with Joe Preston, a legendary musician with arguably the heaviest resume in guitar history, one that includes work with early Earth, mid-‘90s Melvins, White1/2-era Sunn0))) and now, High On Fire (which features an ex-member of Sleep), as well as his own one-man noise-drone-riff unit, Thrones.

“For the most part it was really just mellow times,” says Kevin Doria. “We played video games, went to Taco Bell…just hung out for the most part. He never practiced, not once. Okay, I think he did once when no one was around, for like 15 minutes. I guess he just didn’t like the way it sounded in the basement.”
DeNardo and Doria didn’t mind the basement sound.

“Before Growing, we had a little tape thing called 1,000 A.D.,” says Doria. “It started out as Joe [DeNardo] and me fucking around in the basement: a lot more riffage, no drums or anything, just guitars and bass, really long tedious parts that went on for hours. We were simultaneously doing this other band called Black Man White Man Dead Man which, when it started was more hardcore stuff: fast, loud. As time went on, it evolved into slower heavier jams. Finally we realized that having two bands comprised of the same members was really stupid, so whatever, let’s just have one band. The writing didn’t dramatically change as far as the songs were concerned, but everything did get slower. I’m not particularly good at playing fast, or playing parts even—that had something to do with us getting slower—but also, we just kind of got bored playing hardcore. We got older. It was natural.”

END_OF_DOCUMENT_TOKEN_TO_BE_REPLACED 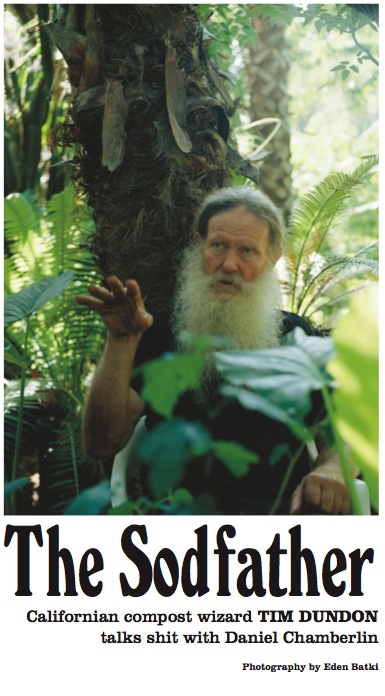 Find bonus Sodfather photos by Chamberlin at Into The Green.

Alchemists are often characterized in modern times as bumbling would-be wizards at best, greedy charlatans at worst. They’re portrayed as fumbling hopelessly in cluttered laboratories, unenlightened madmen trying to turn lead into gold. The reality is more complex, of course.

Alchemists were up to plenty of things, many of them having to do with relating to the natural world—and understanding its processes of transformation and transmutation—in philosophical and spiritual dimensions that transcended traditional religious thinking, both Christian and pagan, and preceded modern scientific thought. The whole “lead into gold” thing was but the most lucrative of the alchemical —or hermetic—practices in the eyes of the monarchs and rulers. Alchemy’s material prima as Peter Lamborn Wilson writes in the recent collection Green Hermeticism: Alchemy and Ecology, “can be found ‘on any dung hill.’ Hermeticism changes shit into gold.” It’s an image memorably realized in Alejandro Jodorowsky’s 1973 film The Holy Mountain wherein the thief character takes a dump in a fancy bucket, and Jodorowsky, playing an alchemist, distills those fresh turds into a hefty chunk of golden bling.

Such fantastical processes are well known to dirt-worshipping gardening sage Tim Dundon, the beneficent caretaker of California’s most famous compost pile and the kindly warden of the tropical forest that has fruited from its rich humus. It’s here that Dundon, a scientist-poet in the truest hermetic sense, finds hope and salvation in the transformation of death into life—of rotting organic matter into nutrient-rich soil—that takes place daily in the fecund jungle he maintains on his one-acre yard.

The botanical odyssey of Dundon, the self-proclaimed “guru of doo-doo” and the man whose mammoth compost pile once covered a football-field-sized lot, begins in 1967 with a marijuana shortage. Like any good gardening story, it encompasses Hollywood producers, fires, suicide, PCP injection, a nude Quaker iconoclast, standoffs with city officials and a violent pet coyote.