Staring into the open end of a computer circuit, we suddenly find ourselves evaporating into a sparkling stream of 0’s and 1’s. In a swirl of stars and blue lights, we feel ourselves becoming weightless; like a magnetic force, the circuit sucks us into it with a single breath and we enter a mirror world where technology reigns, and to our delight we realize that we have once again left our physical bodies behind us. There we meet our very special guests, who one by one guide us through what we can only hope is life after the singularity.

Our first host Bryce Hackford (of Behavior) begins our journey by leading us into a shiny field of electrified plasma, where the local time is set to no higher than 33rpm. We dance in slow-motion leaps and bounds, taking our time to spin and roll in the air, spreading and condensing as the music changes.

After around 45 minutes, we encounter our second host, known on Earth as electronic solo songstress LAUREL HALO, who appears in a flash as a flickering face above a bank of silver clouds. The image mouths to us to follow her into a stream of white lasers, which is pointed directly upwards, disappearing into the unknown. All sense of memory–past, present, and future–is wiped.

Back in the human realm, you can catch Bryce’s transcendence-inducing DJ night STEPS with Kyle Garner on the last Monday of every month at Home Sweet Home in NYC.

You can follow Laurel’s tour schedule and happenings here, and if you are in New York in April you can see her perform alongside Harald Grosskopf, as well as past Arthur Radio guests Arp and Blondes, at the monumental debut of Grosskopf’s 1979 Synthesist reissue on RVNG Intl (more info here). Look out for her upcoming 12″ Hour Logic, to be released in May of 2011.

END_OF_DOCUMENT_TOKEN_TO_BE_REPLACED

When you close your eyes, music emanating from speakers takes on its full 3D form. Physical vibrations reach your muscles in invisible waves, aiding in relaxation. The laser arc of a new sound being introduced pierces your mind’s eye and opens visions; it is possible to recreate an entire scene, part imaginary, part from memory. An isolated ocean in a desert, palm trees swaying against an open horizon. Circuits producing not only the sound of wind, but the feel of it brushing up against your skin, the filling of a vast expanse of sky…

Above: A teaser from this episode’s live set by special guest ARP (aka Alexis Georgopoulos), who recently released his LP The Soft Wave on Norway’s Smalltown Supersound. Order it in the US here.

END_OF_DOCUMENT_TOKEN_TO_BE_REPLACED

Hailing from Baltimore, MD, a bubbling pot that continues to churn out a rainbow fog swirl of new and exciting bands (Crazy Dreams Band, Lower Dens) as well as experimental music and new media festivals (Whartscape, Transmodern), Ami Dang seems to exude the creative energy that is pouring out of her hometown. Her upcoming full-length album (due out in December on Ehse Records), was crafted from an intersecting background of classical sitar and composition, experimental electronics and visual performance, combined with a deep love for ’90s dance beats and a fuzzy memory of megaphones blaring Indian pop songs into the streets of New Delhi.

If you’re in the area next week, catch Ami performing along with many other artists at Baltimore’s High Zero festival on September 23rd and 24th, 2010.

END_OF_DOCUMENT_TOKEN_TO_BE_REPLACED

Our collective lack of sun worship has brought its bright and might down upon us – here, again, to cook up any unbikini’d nether region left out too long. Awoken from its slumber, The Shiney One’s appetite is seemingly unquenchable and it will stop at nothing to make your flesh more palatable. Come, get dehydrated, and join Ivy Meadows and Hairy Painter as they go on a magical and woozy journey through your skin, with fire!

END_OF_DOCUMENT_TOKEN_TO_BE_REPLACED

Two dudes, who remain pseudonymous for their own protection, reason together about new records. They are joined this issue by Melvins’ BUZZ OSBORNE, pictured below at Arthur HQ with his pick o’ this issue’s litter…

D: [listening to opening bomber] He’s inviting us over to smoke “figs” in his yard. Is that a misprint?

C: [pointing at band photograph] They’re in the backyard because these guys are too old too be smokin’ in the boys’ room. Another in a great history of smoking location songs.

D: That could be a Bob Dylan Theme Time Radio Hour!

C: And invitation songs. Remember that Paul Wine Jones song? “Me and the boys/gonna have a good time tonight/Gonna play some poker/Pork chops.” I miss Paul Jones. That guy rocked and had velvet hats to burn. Not that you should ever burn a velvet hat.

D: [musing over band photo, especially the longhair] What does that guy do all day?

C: When not masquerading as a hick savant guarding mama’s moonshine still? Apparently he’s one of the deepest psych record collectors on the East Coast.

D: [looking at band picture again] I would say he’s one of the top hair growers on the East Coast!

C: Endless hair never ends. Seriously though, a band like this only needs one True Believer. And this guy definitely qualifies, let me tell you!

D: [listening to singer squeal, squawk, mutter and grunt on “The Manly Vibe”] Brings back fond memories of Hasil Adkins talking about hot dogs and doing the hunch.

C: Yeah, if Hasil dug the Nuge instead of the King. This album is for everyone who’s ever thought George Thorogood didn’t finish the job.

D: [abruptly] Or that the Kings of Leon aren’t old enough!

D: Well of the course the question is, Can they boogie endlessly?

C: Yes, they are quite capable, these Endless Boogiemen. And after the first song, which lasted about two and a half hours, the singer asked “Do I seem taller? I got some new shoes!” Where’d you get ‘em? somebody yelled. “He took a few seconds, and then answered: “I bought ’em at a store!” They’ve got cool t-shirts: just an infinity sign on black.

D: Can you understand what he’s singing?

C: He’s singing in tongues. This song is called “Steak Rock.” Which is about right. I bet the song is timed so that you can cook a steak in the amount of time it takes to listen to it. So where’s the barbecue at?

D: Not in my backyard, sadly.

C: This record should come with an order of peach cobbler.

D: [doorbell rings] We have a guest.

END_OF_DOCUMENT_TOKEN_TO_BE_REPLACED

(Above: This episode’s collage — double-click to view fullscreen + scroll)

For Transmission #10 of Arthur Radio, we started by visualizing ourselves in a black void, lost in time somewhere between the 1970s and today. Using LED-powered building blocks, we constructed a musical pathway in order to make sense of our surroundings. Brick by colorful brick, we bridged the gap between the oily rainbow pools of German psychedelic krautrock jazziness all the way to the shimmering mists of other-worldly electronic noise being produced by the likes of contemporaries Jonas Reinhardt, Arp, Stellar Om Source, and our very special time-traveling guests, Blondes.

Standing on the other side of the bridge in the murky “now,” we found that transversing between the two realms was easier than we thought. In fact, it seemed that they were always connected by an invisible passage, for the electronic explorers of today were born of very same primordial space sludge that spawned krautrock pioneers Dorothea Raukes, Jean Michel Jarre, Manuel Göttsching and friends, some 40 years ago.

The following description was taken from the back of “The LYTE,” one of the very first audiovisualizers of its kind made in the 1980s. Its sentiment echoes how listening to Transmission #10 makes us feel, and we recommend that you meditate on it for a second before you take that irrevocable plunge, hit “play,” and start time-traveling on your own:

The written word cannot fully describe what the eye and ear can perceive. Tone by tone you see an exact, shimmering definition in light of what you hear. Exotic patterns are born, grow, contract and change shape through an infinity of dazzling complexity; each momentary image a precise electronic expression of the sound you hear… 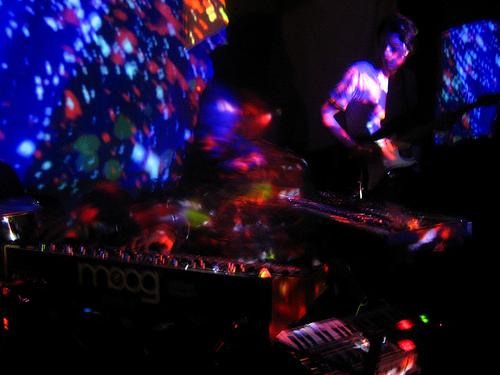 Did you miss THIS tour? That’s a shame. But if Cluster, Harmonia, Goblin or general krautrock-style psychedelia is your thing, try catching JONAS REINHARDT this weekend at DEATH BY AUDIO. The band is comprised of members from The Fucking Champs, Mi Ami, Crime in Choir and Trans Am, and they just put out a new record on the KRANKY label. This will be their first performance in Brooklyn after a while of touring with the likes of White Rainbow, Lucky Dragons and other friends on the west coast. Also on the bill are Aa, WHITE HILLS, ( ( ARP ) ) and SOFT CIRCLE. Guaranteed a good choice for your evening.